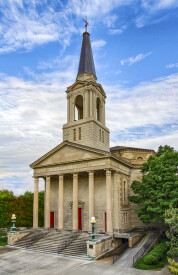 The story of First Baptist Church begins in 1843, when Knoxville was only a village overlooking the Tennessee River. James and John Moses, brothers from New Hampshire, had moved to Knoxville to work as printers. Their background was Baptist, but there was no Baptist church in Knoxville. So with the help of the American Baptist Home Mission Society and members of rural Baptist churches in the surrounding area, the Moses brothers founded First Baptist Church in 1843. Following a baptismal service in First Creek, the church recorded 46 members, including 20 African Americans. The congregation met in a room at the courthouse until a church building was constructed on Gay Street in 1844. Almost immediately a Sunday School was started where slave and free alike were taught to read and many encountered the Bible for the first time.

After early successes, the church experienced difficult days. As the Civil War raged, worship services were temporarily cancelled, and the church building was used as a hospital by the Union Army. When the building was returned to the congregation following the war it was barely usable; however, a few faithful members continued to meet together in the basement to pray. Their prayers and faithfulness were honored as God worked in and through them to bring about a time of growth and innovation. In the years that followed, many new ministries and missions grew out of the church. First Baptist started a ministry for Knoxville's deaf population and churches were planted across the city reaching minority groups and growing population centers. When First Baptist dedicated a new building in 1887, the congregation gladly proclaimed to be "In the Center of the City with the Saviour." God continued to bless First Baptist. Further growth required Bible studies to meet in Gay Street shops and army tents pitched on the church grounds. The congregation knew they must find a new meeting place, but First Baptist remained committed to downtown. Space was found a few blocks away on Main Street, a building was constructed, and the church moved into its new home in 1924, where it remains today. Much has changed in the decades since. Through it all, God has remained faithful as First Baptist has remained planted in the heart of the city for over 170 years. From here, First Baptist has supported missions and ministries across our city and around the world. From here, generations of disciples have been formed and sent out. From here, First Baptist is embracing the future. A future built on a nearly two century legacy as a church in the city, for the city.

For more on our vision and budget for ministry click here.

For a more details about the history and buildings of First Baptist Church click here.

The R.A. Colby Organ builders Company has a section of their website with information about the organ at First Baptist Church. Read more about it here.