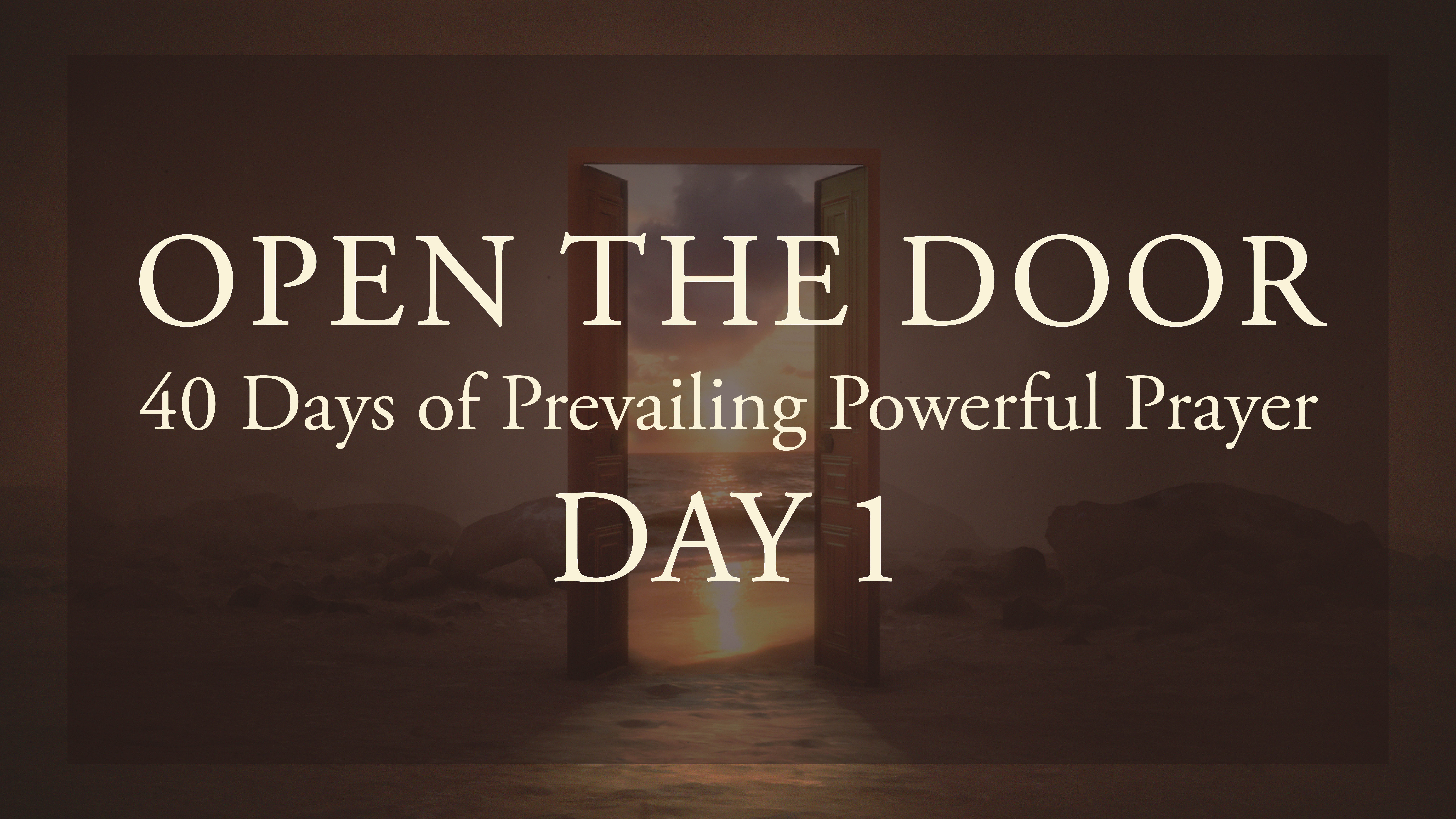 The greatest need in the life of our church is prayer.

While all of these are important, they’re secondary to the central, sacred need of drawing near to the heart of God. Through prayer, peace and power flow from God into our lives. The byproducts of provision, healthy organizational life, and vision for the future only come through prayer.

You’re invited into a 40-day journey to discover that kind of prayer. The devotional series is called Open the Door: 40 Days of Prevailing, Powerful Prayer. You can expect to receive a new devotion each day of the week (except Sundays) from today until Easter.

Each day will feature a teaching from scripture about prayer, as well as a story or idea from the life of one of my heroes of the faith, the 19th century pastor George Müller.

But before we get there, I want to ask: do you have a regular, private, quiet place to pray?

Jesus said that such a place is essential. In the Sermon on the Mount, He taught, “But when you pray, go into your room, close the door and pray to your Father, who is unseen. Then your Father, who sees what is done in secret, will reward you (Matt. 6:6, NIV).”

Jesus contrasts this prayer practice with what he saw in other religious leaders. They stood on street corners to pray or launched into lengthy, pious prayers to impress others. They liked to be seen. Jesus said they have their reward: the applause of others human beings.

Instead, go into your room and close the door, Jesus counseled. God, who is unseen, will see what you have done in secret and reward you.

In the secret place, we meet more than a distant, uncaring deity. There we encounter our Father. When Jesus used the personal word father, He invited His followers to believe in a close, caring, generous God who loves us like children.

Each day we need time in a quiet place where we can talk in intimate words with the Living God who loves us. In that secret place we can ask for what we need, then open the door to a day of possibilities. We can center our hearts again and again throughout the day, asking for what we need and trusting that God is willing to supply it all.

Could it really be true when Jesus said, “Ask and it will be given to you (Matt. 7:7, NIV)”? Can we really believe Jesus when He says, “If you have faith and do not doubt…you can say to this mountain, ‘Go, throw yourself into the sea,’ and it will be done. If you believe, you will receive whatever you ask in prayer (Matt. 21:21-22, NIV)”?

Were these promises only for those first disciples, or do they extend to us as well?

Born in 1805, George Müller served as a pastor in Bristol, England, for most of his life. He opened orphanages over four decades of ministry and helped over ten thousand children have a home, education, and loving adults to guide them.

Müller’s greatest legacy, however, was his life of prayer.

In 1877. Müller crossed the Atlantic from Newfoundland to Quebec for a preaching event. An unexpected, heavy fog descended and delayed the ship considerably. The captain of ship, a nominal Christian who had little experience with prayer, had been on the bridge for twenty-two hours straight, worried and afraid for the crew and passengers.

All of a sudden he felt a tap on the shoulder. It was Müller.

“Captain, I have come to tell you that I must be in Quebec on Saturday afternoon,” said Müller.

“It is impossible,” said the captain.

“Very well,” replied Müller. “If your ship can't take me, then God will find some other means to get me there. I have never broken an engagement in fifty-seven years.”

“Mr. Müller, do you know how dense this fog is?” pressed the captain.

“No,” Müller said, “my eye is not on the density of the fog, but on the living God, who controls every circumstance of my life.” He then went down on his knees and prayed one of the simplest prayers the captain had ever heard. “O Lord, if it is consistent with thy will, please remove this fog in five minutes. You know the engagement You made for me in Quebec for Saturday. I believe it is Your will.” It sounded to the captain’s ears like a prayer from an eight or nine year old.

When he had finished, the captain started to pray. Müller, however, put his hand on the captain’s shoulder and told him not to pray.

“First,” he said, "you do not believe God will do it; and, second, I believe He has already done it. So there is no need for you to pray about it.” The captain stared in amazement.

Müller continued, “Captain, I have known my Lord for fifty-seven years and there has never been a single day that I have failed to gain an audience with the King. Get up, Captain and open the door, and you will find the fog is gone.”

The captain got up. He opened the door. The fog was gone. On Saturday afternoon George Müller was in Quebec.

Do you believe that God is your Father? Do you trust that God delights to grant your requests of anything that is for your benefit, and especially when you ask according to His will and for His glory?

I invite you today to go into your secret room. Ask for what you need. Then get up, open the door, and see what God can do.