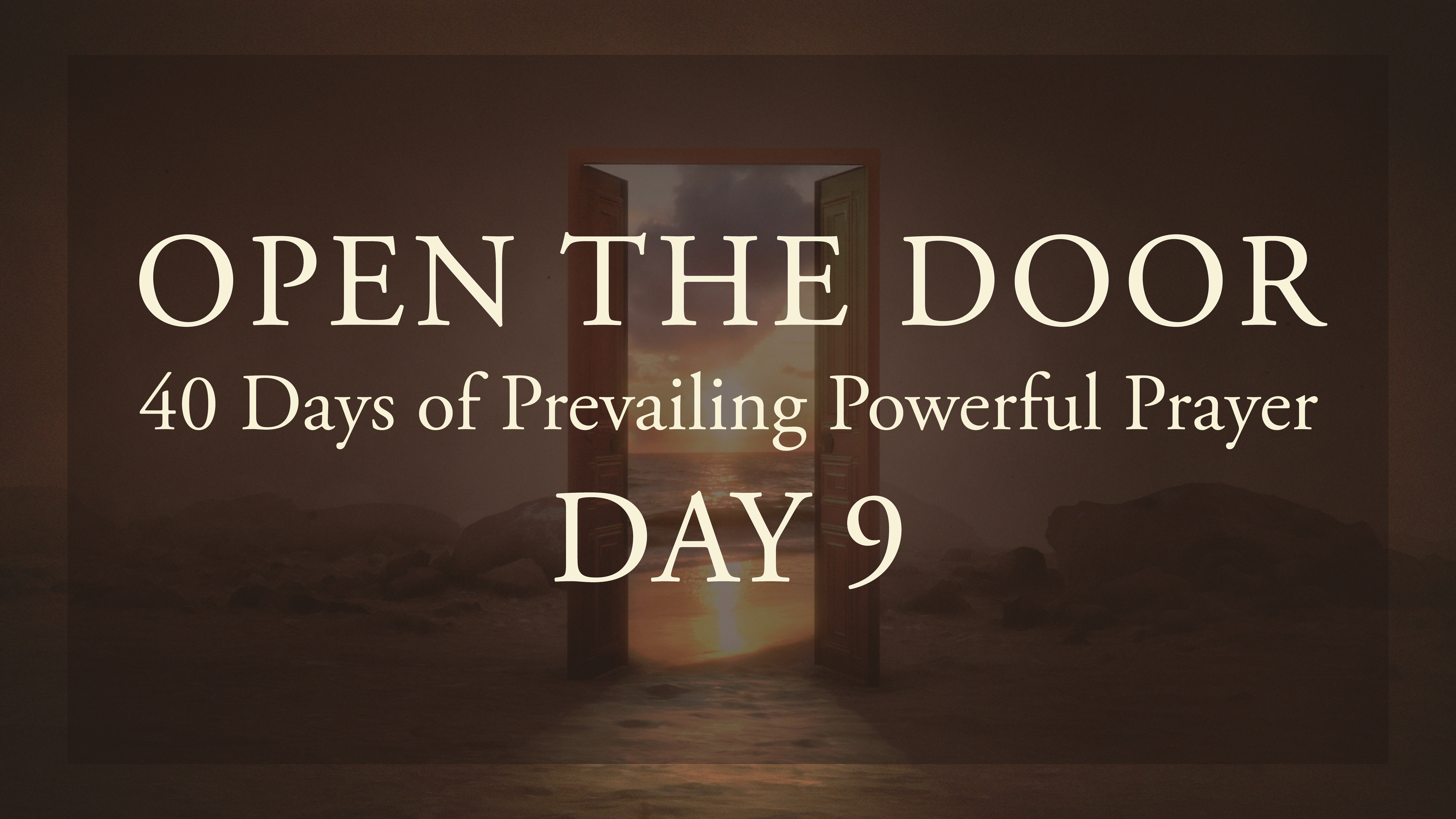 “And whenever you stand praying, forgive, if you have anything against anyone, so that your Father also who is in heaven may forgive you your trespasses.” (Mark 11:25 ESV)

Could a lack of forgiveness for someone be a reason that you don’t experience more answers to prayer?

In my twenties, I carried a lot of anger against my dad. My perception was that he wasn’t present for me emotionally during my growing-up years. That was probably true. There are lots of other ways, however, to be present for a person. Dad was a good provider. He showed up at ballgames and taught me how to play golf. I’m grateful now for the things he did well.

Maybe now that I have been a dad who has raised kids and launched them out, I can appreciate just how ridiculously hard it is for a father to be everything that a modern kid needs.

For a season, I felt like the anger was a real block in my future navigation of life challenges. So I worked through it in counseling and journaling. I carried a lot of blame and shame. I came to understand that my dad just wasn’t raised to talk about his problems or feelings. It’s like he didn’t have the tools. Or maybe he was afraid. He had his own issues related to his father. It’s scary to start down a road that could lead to some real messiness.

Over time I realized that the problem I had wasn’t him. It was me.

Recently I was outside on one of our warmer days. Rather than enjoying the day, I was stewing on some negative thoughts about a person that often makes me angry. Surrounded by the beauty of plants and trees and birds, I was stupidly concentrating on something that only hurt myself.

This is the great irony of holding onto past resentments and bitterness.

“Resentment is like drinking poison and then hoping it will kill your enemies,” said the South African leader Nelson Mandela.

When we don’t forgive, we only hurt ourselves. A lack of forgiveness is at the heart of many issues that require counseling. I know that was true for me. It's like I held my dad in a prison within my heart, and no heart is meant to be a prison.

I realized around the age of thirty that I really hadn’t forgiven my father. I also came to realize that he himself was not equipped to fix what he had no field of vision to understand. He had not been given the tools to navigate pain, vulnerability, and healing conversation. It wasn’t his fault, really. You can’t give what you don’t have.

In the end, there could be no peace without forgiveness. There would be no apology, no moment of truth, no breakthrough between him and me. All that was left was the residue in my own mind, and that was mine to handle.

I don’t know why it happened like this, but a friend had invited me to come and officiate his beach wedding at Gulf Shores, Alabama. We were staying at a hotel a few miles from the beach. It was a cramped room with my wife and young son and daughter. My heart was really burdened for some reason — I can’t remember why — and I felt like I needed some peace. So I got up in the middle of the night and went in the bathroom. I tried to pray. I found myself thinking about my dad and being aware of how much resentment I held against him.

In the quiet of that dark, small room, I said, “I forgive you.”

I felt a weight lift from my shoulders. I knew something in me had changed. I left all of that bitterness and resentment in that hotel bathroom.

Deep down, I knew that if I hadn’t forgiven him, then I really couldn’t receive forgiveness for myself. A heart unwilling to forgive is not “good soil” in which forgiveness can be received.

Jesus links forgiveness with prayer. “When you stand praying, forgive…” He also taught in the model prayer that we should pray, “Forgive us our sins, for we also forgive everyone who sin against us (Luke 11:4, NIV).”

Why did He teach us the importance of forgiveness for others as we stand before God in prayer?

Failure to forgive blocks our connection with our Heavenly Father. It limits intimacy with God because a failure to forgive signals that one is not approaching God with a posture that all of life is grace.

Forgiveness breaks the power of resentment, retaliation, and bitterness that can so easily dominate our hearts when we don’t forgive.

This is why Jesus taught, “If you are offering your gift at the altar and there remember that your brother or sister has something against you, leave your gift there at the altar. First, go and be reconciled to them; then come and offer your gift (Matthew 5:23-23, NIV).”

We must extend grace to receive grace. We must forgive to be forgiven.

Grace is extended to all.

George Müller said once in a sermon, “There is even the possibility that the greatest thief, the greatest robber, the vilest person that ever lived under heaven, can obtain forgiveness for his crimes. There is grace found in God, since ‘He is the God of all grace,’ that whatever amount of grace is needed, it is to be had in Him. It is to be found in God. The greatest sins can be forgiven."

When we forgive others, we make room in our hearts to receive more answers to prayer.

If we expect to receive anything in prayer, we must forgive.

Corrie Ten Boom, along with her family members, helped many Jews escape from the Nazis, during the Holocaust in World War II, by hiding them in her home. She believed her actions were doing the will of God. When they were arrested, Corrie and her sister were sent to the Ravensbrück concentration camp. Her sister was killed, but Corrie survived.

Corrie once told about going to a church in Munich, Germany in 1947 to speak. She had come back to Germany after surviving the holocaust with the message that God forgives. In Munich, Corrie preached, “When we confess our sins, God casts them into the deepest ocean, gone forever.”

As people stood up to leave, she saw a balding, heavyset man in a gray overcoat in the congregation. Her heart became overwhelmed with fear. She remembered this man in a huge room with overhead lights and piles of dresses as he forced female prisoners to walk naked in front of the guards. Now the guard from Ravensbrück concentration camp stood before Corrie.

He approached her and thrust his hand out in greeting. “A fine message, fräulein! How good it is to know that, as you say, all our sins are at the bottom of the sea,” he said. He didn’t remember that she had been there, but she remembered him.

“You mentioned Ravensbrück in your talk. I was a guard there. But since that time I have become a Christian. I know that God has forgiven me for the cruel things I did there, but I would like to hear it from your lips as well. Fräulein” – and again he put his hand out to shake hers – “will you forgive me?”

Corrie would later say, “I stood there — I whose sins had every day to be forgiven — and could not. Betsie had died in that place — could he erase her slow terrible death simply for the asking?”

“[But] I had to do it — I knew that. The message that God forgives is clear: that we forgive those who have injured us. ‘If you do not forgive men their trespasses,’ Jesus says, ‘neither will your Father in heaven forgive your trespasses.’”

She stood there with coldness clutching her heart. Forgiveness is not an act of emotion, she knew. It is an act of the will. So she prayed silently, “Jesus, help me! I can lift my hand. I can do that much. You supply the feeling.”

Mechanically, she thrust her hand into the one stretched out to her. As she did, an incredible sensation took place. The current started in her shoulder, raced down her arm, and sprang into their joined hands. Then a healing warmth flooded her whole being, and she said, “I forgive you, brother! With all my heart!”

Do you want more power in prayer?

Do you want to find release from a burden you have carried for too long?

Whom do you need to forgive?

With all your heart.