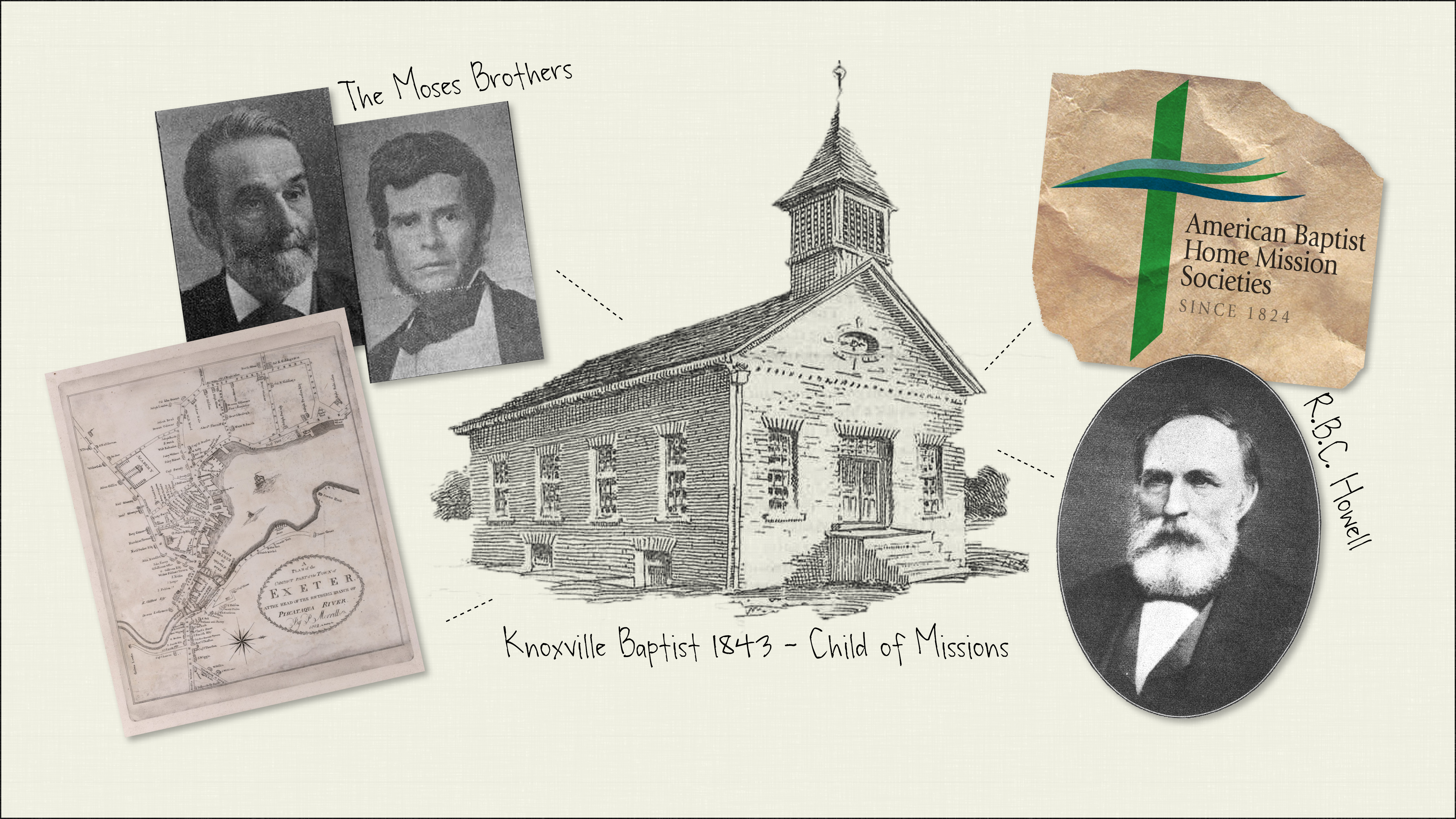 "The Fervor for Missions Brought this Church into Being"

Before this time the Baptists of East Tennessee were rural. There were seven Baptist churches established in Knox County before First Baptist [originally Baptist of Knoxville] was formed in Knoxville. The two oldest were begun in 1797.

The fervor for missions brought this church [First Baptist Knoxville] into being.  Motivated by their motto, "North America for Christ," the American Baptist Home Mission Society in New York sent R. B. C. Howell to First Baptist in Nashville in 1834. The influence of this church reached into East Tennessee through Howell.

The media has always shaped our society.  It was the establishment of "The Times" [newspaper] by Perey Dickinson who brought to Knoxville the men who would be most used by God in the formation of First Baptist.  James C. Moses came from Exeter, New Hampshire to be the printer for The Times.  In 1841, he became its owner and brought his brother, John, who had graduated from College to join him. Though neither were Christians at the time, their father had sown the seed of faith in them. Their father was a deacon and Sunday School Superintendent.

The First Presbyterian Church played a major role in the formation of First Baptist.  James Moses attended church there and became their choir leader. When a revival broke out, James accepted Christ but because of his Baptist background did not join First Presbyterian.

One day, seated in his [James C. Moses] office [located on Gay Street], he proposed to his brother, ‘Let's have a Baptist Church in Knoxville.’  They wrote to R. B. C. Howell in Nashville for advice on how.  He [Mr. Howell] urged them to make an application to the American Baptist Home Mission Society of New York and ask for a missionary.

First Pastor - 1843. They sent Joseph A. Bullard who was approved by the faculty of the Home Literary and Theological Institution of Hamilton, New York which is now Colgate University.

Upon arriving, Bullard found only two young men and three females who were Baptists. He borrowed members from Third Creek, Beaver Dam, and Beaver Ridge (now Ball Camp).  John Hillsman served as moderator. They adopted the Articles of Faith of the Philadelphia Confession. Forty-six charter members; fifteen white men and eleven white women and 20 ‘colored persons’ elected J. A. Bullard pastor with James C. Moses and John Smith as the first deacons, and in February of 1843 the church [Baptist of Knoxville] was formed.” 1

Thus, First Baptist began as “a child of missions.” During its 175 year history, it has become “the mother of missions.”

1From Dr. Charles A.Trentham's "A Fountain-Head of Hope - A Story of a Hundred Years of the Mission Work of the First Baptist Church of Knoxville, Tennessee" (p. 7 -9). It is estimated that this document was written in the late 1970's or early 1980's. Dr. Trentham was the pastor of First Baptist Knoxville from 1953 to 1974.