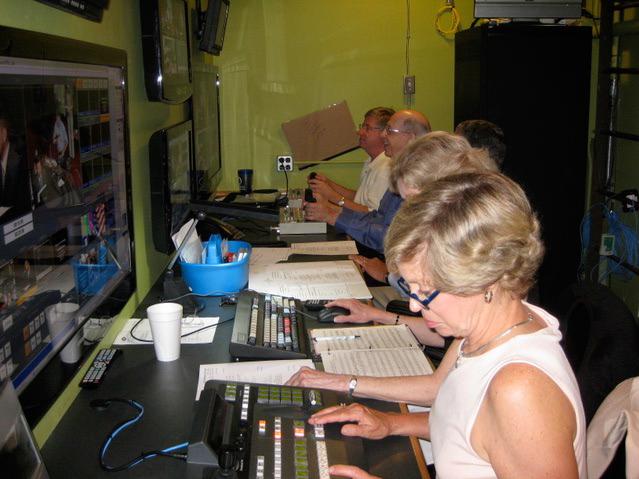 For over 40 years our church has broadcast our 11 am Services live on TV. We would like to share information about how that broadcast is generated, what talents are needed, and where the equipment is located. This is an effort to improve understanding and appreciation for this valuable ministry.

On June 7, 2009, at the conclusion of the Facilities renovation, newly installed High Definition television equipment was used for the first time for the live broadcast. For 10 years it has served us well and still meets our needs quite well.

The television control room is one floor above the rear balcony and reached by stairs behind the in-house audio control booth. It is a small room with enough space for the equipment and operators. We currently have three very dedicated teams of six members each that rotate Sundays. Each team has a Director, an audio controller, a graphics controller, a switcher, and two camera operators. Team members often substitute on other teams when someone has conflicts and cannot work on their normal rotation. Each camera operator controls two cameras from each control board. They choose which of their two cameras they are controlling at any instant and can zoom and pan that camera. The camera operators sit beside the Director who gives them instructions about the camera shots needed. Experienced operators often anticipate the shots needed and have the shot ready before the Director calls for it.

The Switcher sits on the other side of the Director and controls which camera is on standby and which is recording live video. The Director tells the Switcher when to choose a camera and when to switch from standby to live.

The graphics controller sits on the other side of the Switcher and has a monitor containing the graphics available for the service as well as displays showing the standby and active video selections. The graphics include names of speakers, scripture references, words to hymns, titles of choir anthems, and more. This controller must be very attentive to the flow of events as they announce to the team what is coming next in the service and which hymn verse is being sung. Weekly preparation includes arriving early, starting the equipment, checking for proper operation, adjust- ing as needed, reviewing the order of worship, and deciding on the sequence of camera shots for the beginning of the service. The graphics controller carefully checks the order of graphics available for the service ensuring there are no surprises. The graphics can be edited as necessary but that is seldom needed. Mic checks are performed with the audio controller to ensure the audio is working properly. Before the service begins, Richard Buerkle (or acting Music Minister) visits the control room to discuss the service details with the team. Particular attention is paid to how the hymns and choir music will be performed so the graphics and camera operators will know what to expect. Richard also tells where soloist will be standing, how and where special music will be performed and gives details regarding special parts of the service. The Director calls the television station to confirm that the video and audio signals being sent to them are received and to compare station time with the control room clock to ensure accurate on-air and off-air times. In addition to the live broadcast, the service is streamed on the internet with streaming continuing past the off-air time of the station to the ‘fade to black’ direction after the Postlude. All services and recordings are archived to our website and to a separate hard drive located in the TV booth. A DVD recording can be made of any service for congregation members that want it. Plans are being made to stream the service on a YouTube and a Facebook internet channel also.

A member of the church staff supports the music and TV ministries by generating the graphics and order of service each Sunday. The administrative assistant generates cue sheets for the service which are used by each team member. It lists the video and audio needs for the order of worship. A notebook containing hymns and music presented by the choir is prepared for the graphics controller so they can keep up with each activity during the service. In addition to Sunday morning services, the teams are sometimes asked to live stream or record other services or events. The Christmas Eve service is always broadcast live, and some funerals have been recorded for families who requested them. Special performances in the sanctuary, conferences, and other events can be recorded. Teams are not scheduled for such events, but the staff sends requests asking for team members that are available and willing to work during that service.

The church receives nice compliments about the quality of the broadcasts from regular viewers and members who watch the service when unable to attend in person. The Pastor and staff members say they are often recognized in public by someone saying they saw them on the televised service. The Congregation has been very supportive of the television ministry and we hope that continues for a long time. Current team members are

New members are needed now, especially at the graphics controller position. Interested people are asked to contact a TV Team member or just come to the control room before a Sunday broadcast to observe the operation. You might see an activity that appeals to you and which position you might be interested in. You can come and learn more about that position and get a little hands-on experience before making a commitment.