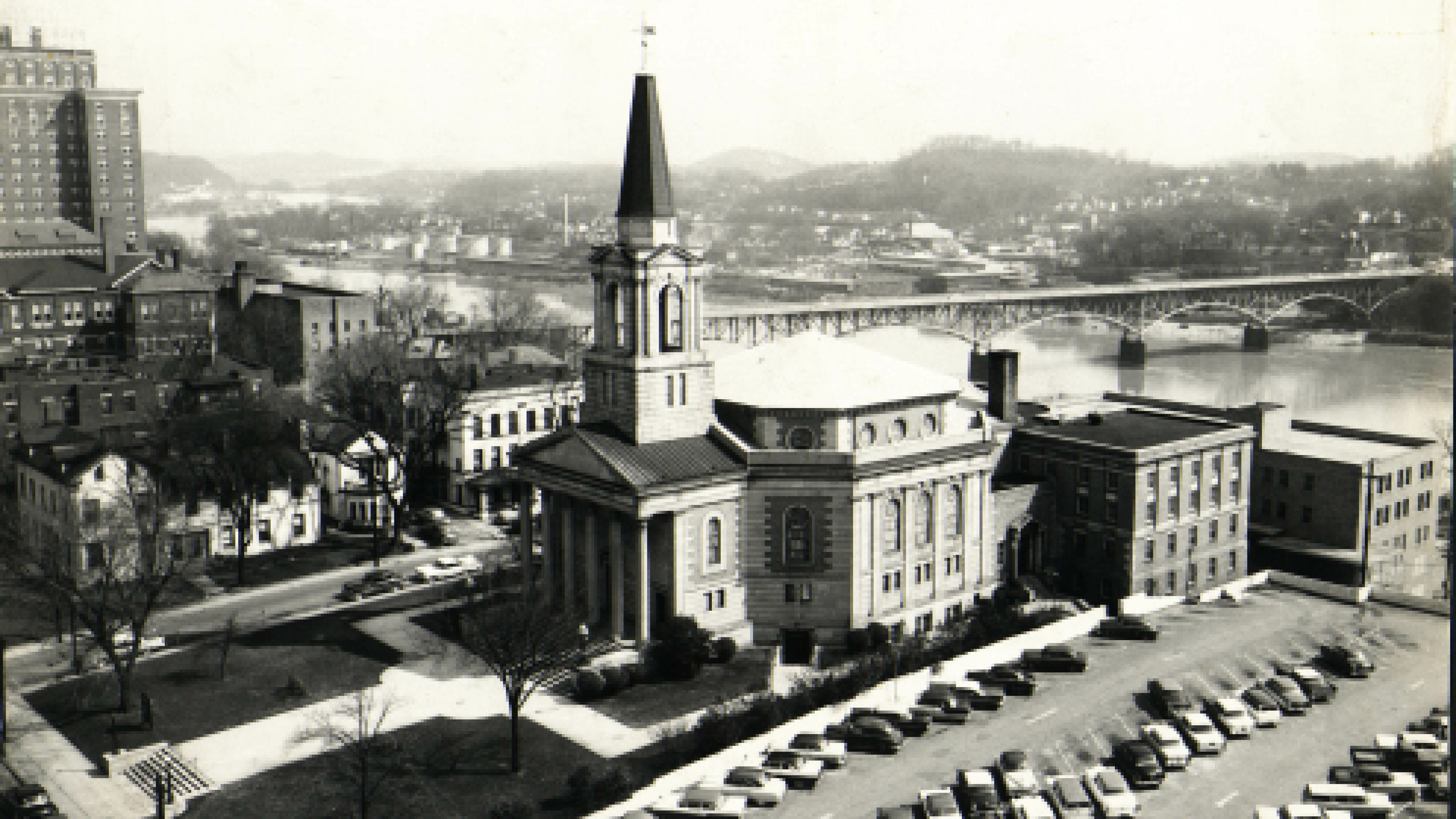 Knoxville’s population increased from under 10,000 in 1880 to almost 27,000 in 1910 with the city becoming one of the South’s major wholesale and distribution centers.

First Baptist’s history during the first quarter of the 20th century is rich in detail. In 1900, First Baptist’s first parsonage, a four-room house located on the corner of Clinch Avenue and Third Street, was purchased for $2400. The last record of sanctions levied against church members was in 1902, when 16 members were excluded “for conduct contrary to the convictions” of the church. In 1915, electric lights were installed in the church. The same year, Dr. Leonard Broughton became the minister after serving in London, England. Having ministered to British parishioners affected by WWI, his messages promoted the Allied cause with the services being akin to patriotic rallies. Sixty-three church members fought in the war, and three died in the conflict.

Beginning in 1912, efforts were made to expand the scope of the church’s programs, including Sunday school, which had been primarily for children. In 1915, the program was further restructured to include classes for all ages. That same year, the Baptist Young People’s Union, later called Training Union, was established. Beginning in 1917, an interdenominational class was taught on Friday evenings. In 1918, the Girls’ Auxiliary was organized; the Royal Ambassadors had been organized ten years earlier. The Human Interest Bible Class for men was initiated in 1921 with seven members and eventually grew to an average attendance of 380. The UT Bible Class was another popular option with Mrs. Fred Brown as one of its favorite teachers. In 1922, the deaf ministry was organized under the leadership of Mrs. Laura Formwalt, who led a class for the deaf and interpreted during church services.

Background Leading to Laying of Cornerstone for a New Church

The growth of Knoxville and First Baptist’s membership resulted in the need for more room. In 1911, a space at the back of the church was enclosed for an additional classroom. In 1915, an adjacent lot behind the church house was acquired, but was too small to accommodate the church’s needs. Then a lot on the corner of Cumberland and Walnut, south of St. John’s Episcopal, was purchased as a potential site for a new facility; however, this space was later deemed too small and too close to another church.

By the time Dr. Fred Brown arrived in May of 1921, membership had grown to 1,115. The overflow Sunday school classes met in tents behind the church and in buildings along Gay Street. That same year, the church’s properties were sold and the lot on Main Street was purchased. It was the site of the C.J. McClung mansion and previously the old jail, which had been used as a military prison during the Civil War. During a Wednesday night prayer meeting, members began making pledges to a building fund. Doughtery and Gardner of Nashville were selected from among five architectural firms after a competition was held costing $5,000 and spanning almost a year.

The cornerstone was laid in June 1923. Its inscription—“The church of the living God, the pillar and ground of truth”—is from I Timothy 3:15. Among the documents placed in the cornerstone were those from the second church’s cornerstone. A two-hour service attracted 450 people who stood, sat on marble slabs and chairs, or perched on the church’s foundation walls. Participants joined in singing “I Love Thy Kingdom, Lord” and “How Firm a Foundation.” Among those attending were the son and grandson of John Moses, one of the church’s founders. Speakers included Dr. Brown, who described First Baptist as “the mother of churches,” referring to the various missions it had established.

Transition from Old to New

The demolition of the second church house on Gay Street was described in a newspaper article:

[The] tongue of the great bell, which caused windows to vibrate in days gone by is silenced as is [the] deep-toned organ, which reminded passers-by of duty to God …. The old First Baptist Church … is soon to become one of the ‘dear remembered things.’ … In its stead will be erected a monument to the progress of Knoxville—the new home of The Journal and Tribune.

Construction was a massive undertaking: 7500 cubic yards of soil were excavated for the foundation; 2,000 freight cars of average size and capacity transported construction materials; 286 working days were required. The cost was $600,000 (with the final payment made in 1939, when a dedication service was held).

In the weeks preceding its opening, the church garnered much attention, as revealed in the following newspaper article excerpts:

One more great asset is added to Our City Beautiful, one more great responsibility, one more great opportunity for service of the highest type. … in a few more weeks the messages of hope, peace, and good will on earth will ring forth on the quiet Sunday breezes from the chimes of the stately and beautiful edifice ….”

Faced with Indiana limestone, the exterior of the church will be a gem of architectural beauty. Inspired from the designs of [James] Gibbs, whose genius conceived some of the finest and noblest works of English Renaissance architecture*, this magnificent building will stand apart as one of the leading examples of this style in America. The monumental portico composed of six massive stone columns with carved stone capitals provides an approach of great dignity and charm. An elaborate hand-carved frieze of garlands and cherubs will serve to add chaste beauty to the otherwise severe exterior. A graceful tower rising majestically above the portico and overshadowing in its height the main portion of the building will serve as an appropriate pinnacle for such a noble structure. *[Many of the exterior details resemble those of St. Martin-in-the-Field in London’s Trafalgar Square.]

A Thing of Beauty: As the laying of the sod in front of First Baptist Church is being completed, the great beauty of this structure at last becomes fully apparent.

A walk as wide as an ordinary city street leads to the imposing entrance through a lawn of closely cropped grass which resembles the lawn of a city mansion instead of a public building.

First Baptist on Main Street was formally opened on September 7, 1924. According to one newspaper article, the congregants expressed “amazement and appreciation at the beauty of the new building.” The new church’s ambience was also described:

“Light softly filtered itself through the high stained windows of the richly designed dome and revealed the delicate grey, brown, and purple veining in the marble that lines the upper portion of the auditorium. In soft contrast to the colors are the restful tones of the walnut woodwork and supports.”

That Sunday’s morning bulletin provided welcoming words: “With a spirit of gratitude we welcome you to worship with us today. May the songs that are sung, the prayers that are offered, and the sermon to which you shall listen be a spiritual uplifting to you and acceptable worship of God.” That evening, Dr. Brown conducted the first baptismal service in the new church. Special services were held throughout the first two weeks, including a revival the second week. An organ recital included selections from Handel, Bach, Enesco, Tchaikovsky, Brahms, Arcadelt, Mendelssohn, Schubert, and Wagner.

Of the original 40,000 square feet of floor space, 33,740 were devoted to Sunday school space with a capacity for 2,685.  (According to a November 1924 bulletin, the Sunday school had 70 “live, wide-awake classes.”) The sanctuary was built to seat 1200 with overflow space for 200. Dr. Fred Brown’s wife, Nona selected the Biblical inscriptions in the sanctuary. A St. Louis company was paid $3,000 to ensure the sanctuary’s outstanding acoustics. The sanctuary’s passages were designed to ensure “good ventilation and free circulation.” Dr. Brown had suggested that the balcony stairs descend near the pulpit “for evangelistic and other practical purposes.” The choir loft with the baptistry elevated behind it was designed “in accordance with the most approved custom.” A journalist commented on the church’s stained glass: “[It] is more characteristic of ‘high church’ churches than it is within the … Southern Baptist tradition; however, the earth tones of the stained glass at First Baptist do harmonize most effectively with the warmth of the subtle coloration throughout the auditorium.”

Several memorials were funded by church members. For example, the marble panel over the vestibule’s central door memorializes the church founders, James and John Moses. The sanctuary’s 100-bulb chandelier is in memory of Mrs. Cecil Baker’s husband. In memory of their daughter, Mr. and Mrs. J.H. Anderson purchased the Hook and Hastings 2500 pipe organ, which cost $20,0000 and was one of the largest church organs in the South.

A large secondary auditorium, where the Fred Brown Chapel is now located, was designated for prayer meetings and included a large stage with dressing rooms, facilitating various productions. The kitchen was conveniently located just down the hall. The deacon’s room with its beamed ceiling, now the conference room in the office suite, was “furnished somewhat after the fashion of a director’s room in a modern bank building.” A swimming pool with shower rooms, lockers, and a spectators’ gallery was in the original plans but later deleted to cut costs.

On November 23, 1924, a radio station, WFBC, was launched and announced in the morning bulletin: “The service this morning will be transmitted out to a large congregation by us unseen. … It is the fruition of a wish expressed by [Pastor Brown] that we might carry our services to the shut-ins and shut-outs of our city.” Until 1934, both morning and evening services were broadcast, reaching over a 500-mile radius.

In 1924, First Baptist on Main Street was acclaimed a “splendid achievement in ecclesiastical architecture designed to meet [the] needs of modern church organization.” The impact of walking into the new church was likened to that of walking into the Library of Congress for the first time: “the indescribable thrill that beauty and grandeur [brings] ….” Our beloved church still meets those needs and still has such impact.

Information for this article was gathered from First Baptist’s archives unless otherwise noted.

Thank you for the. History of FBC. Please note that it was Dr.brown 's
Wife who suggested the inscription
For the Sanctuary walls.
V

Yes, as noted in the article, Dr. Brown's wife chose the scripture for the inscriptions.