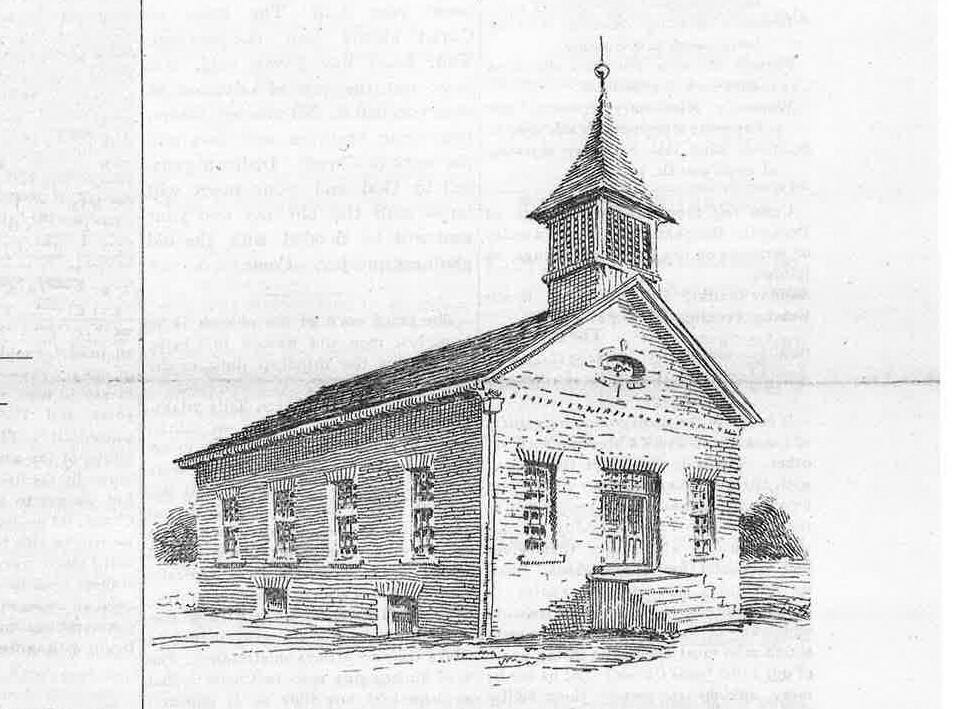 Before a Baptist church was in Knoxville, Knox County had seven Baptist churches, with the oldest beginning in 1797. Forty-six years later in January 1843, Knoxville Baptist Church (appropriately renamed First Baptist in 1869) was founded at the Court House, which was completed the previous year and where church services were held rent-free in a 25’x40’ upstairs room. With only five Baptists in Knoxville, members were “borrowed” from nearby towns to return to their home churches once Knoxville Baptist was established. With a charter membership of 47, the church was started under the Northern Baptist Convention’s auspices and received financial and spiritual support from the Baptists of Exeter, NH, home of the two church founders (James and John Moses) before they moved to Knoxville.

The same year, Reverend Israel Robards, a visiting minister, held a revival. Court adjourned at 10 A.M. and stores closed for the revival. According to John Moses, Robards “continued for 16 days and nights preaching sermons of wonderful power and arousing the community to a pitch of excitement which it had probably never reached before.” By September 1843, the church membership had grown to 80. The church’s first pastor, J.A. Bullard, predicted Knoxville Baptist’s future: “[It] will eventually give character to our whole denomination in E.T. This is the center of influence and whatever this church becomes the others will follow. The true gospel will go out from here as it did from Jerusalem.”

By 1844, plans were underway to build a house of worship. In April 1845, services moved to the unfinished church house’s basement. Labor and goods were donated to the building effort; nevertheless, construction slowed because of insufficient funds. The almost-completed auditorium was first used in December 1849 for the wedding of the Moses brothers’ sister. The building was completed in when according to church minutes Knoxville Baptist was deemed “one of the best houses of worship in Tennessee.”

Located on Gay Street, it stood where the Arcade Building is today, just south of the Tennessee Theatre. The 60’x43’ brick structure cost $8,000—plus $500 for the property, previously the location of Blount College and later East Tennessee College (UT’s forerunners) and originally owned by James White, Knoxville’s founder. With a steeple and a full basement, the church sat 25 feet back from the dirt street. Evening services were held at the hour determined to be “early candle lighting” with congregants worshipping in the flickering light of candles in tin sockets.

From March 1850 until September 1852, the church was without a regular minister. During those years, the church struggled, with membership falling to 42 in 1851. Because of ongoing debt, a dedication service was never held for the building, which was almost auctioned off. However, with a new minister’s arrival, the church began to grow again and by 1854 had 91 members. This number might have been higher if not for the cholera epidemic that besieged Knoxville in the summer of 1854, resulting in many deaths and others fleeing. Gradually, the city and the church began to recover. Although the number of members by 1860 is difficult to determine, committees were clearly part of church life. Minutes of church business meetings from the mid-1850s to 1860 reflect the Steeple Committee’s concern with the church’s leaking steeple. In 1860, the first church covenant was adopted, and the bylaws were revised.

Reverend Homer Sears, who served from 1844 to 1850 and wrestled with many of the church’s early difficulties, wrote of Knoxville’s potential: “East Tennessee … is to become at no very distant day the New England of the South, with Knoxville as the commercial center.” Regarding the years prior to the Civil War, Knoxville historian Jack Neely has noted, “Knoxville was on the brink of its rebirth. … Knoxville in 1853 seemed like the sort of place where something was about to happen ….” In fact, much happened in Knoxville during the remainder of the decade.

Beyond the boundaries of what is now downtown, Knoxville was surrounded by farmland, making produce readily available. Farmers peddled their harvest from wagons on Gay Street and Market (then known as Prince) Street, which were described in 1850 as being “in such a condition to be a source of shame and mortification,” a condition that was addressed by mid-decade.

A trend in progressive cities was a market square with a market house. In 1853, two savvy property developers followed this trend by purchasing an 11-acre wheat field for development in the middle of Knoxville. Donating a little over an acre to the city, they designated the space for a market house. The remaining acreage was divided into 66 plots and sold. Eventually, various structures appeared on the plots including saloons, a grocery store, Knoxville’s first bowling alley, and residences. An April 1853 article entitled “Knoxville Goes Ahead,” published in one of the city’s three newspapers, The Knoxville Whig, discussed plans for the Market Square project and anticipated Knoxville’s future: “. . . prosperity, greatness, and glory await this ancient metropolis. Knoxville is the point of all points in East Tennessee for men of business and enterprise to settle.” Although what was originally named the Knoxville City Market, completed in 1854, was slow to take off, the project (including what was also called Market Space in Knoxville’s first city directory in 1859) was the forerunner of the modern strip mall and became an important gathering place. (In 1861, Market Square was one of the polling sites for voting on whether Tennessee would secede from the Union, a vigorously debated issue during the antebellum years.)

At the beginning of the 1850s, Knoxville was isolated in terms of engaging in commerce with other regions because of lack of railroad access and because steamboat access was limited to certain times of the year; thus, building a railway connection was a priority. With construction over the subsequent years, the workforce included an influx of Irish as well as other European immigrants. The long-awaited train arrived in Knoxville in 1855 on the new East Tennessee and Georgia line; Knoxville was linked to Virginia and the Northeast by another line the following year. With the railroad’s arrival, marble quarrying (from a quarry opened two miles from downtown in 1852) became a major industry.

Other noteworthy developments occurred in the 1850s. In 1855, Immaculate Conception, the first Catholic church in East Tennessee, opened. In 1856, gas street lights illuminated Gay Street, which had been paved three years earlier with cobblestones from the river bottom and banks. With a large machine shop, an iron foundry, and a flour mill, Knoxville was becoming a manufacturing city. Between 1850 and 1860, Knoxville’s population grew from 2,076 to 5,300.

Thus, the antebellum years were significant for the Baptist church on Gay Street and the burgeoning city. Beginning in 1861, however, the winds of war brought devastation.

A superb article. Thanks so much

Any idea of the year of the last photo (the group photo)?

In town for a family wedding on 1/14. Visited in your beautiful church for morning services.
It is easy to see how your long history of “proclaiming the Word” has led you to the up lifting experience we had.
Thank you.

Hi I found this regarding my 5th great uncle Elihu Millikan as one of the founder and preachers of the First Baptist Church in Knoxville TN. However I do not see his name mentioned in the churches history. Can you tell me why?

Elihu Millikan, became a Baptist minister in the First Baptist Church of Knoxville, Tennessee, January 22, 1843, his name appears there, and he preached in many other churches in that area. He was listed in the Tennessee's Pioneer Baptist Preachers.

As noted in the article, James and John Moses were the founders. Elihu Millikan never served as a minister at Knoxville Baptist; instead, he was among the ministers and members from a neighboring county invited to serve on the council that helped organize the newly founded Knoxville Baptist Church. The church records contain no additional reference to him.